The machine is suitable for semi-automatic assembling and rolling angle valves. It is composed of a painted steel structure, with plexiglass protection walls and doors on three of the upper side, where are placed the assembling and testing devises. The front side is accessible for the manual positioning of the pieces and is protected by two safety photosensors.
The machine is completed with a feeder and a Pick&Place to place the handle, a rolling tool to roll the hole of the angle valve and a Pick&Place to unload the assembled the angle valves. The command panel and the HMI are placed alongside of the manual station.

CYCLE
A) Manual placement of the tap and the screw in the support (Station 1)
B) Automatic screwing by a screwdriver placed vertically on the table (Stazione 2)
C) Rolling of the hole of the tap by a pneumatic roller tool (Station 3)
D) Feeding, setting and assembling of the plastic handle on the pre-assembled taps. The handles are provided by a vibrating feeder, separated and placed by a Pick&Placed (Station 4)
E) Final assembling of the handle and unloading of the angle valve by a Pick&Placed with a gripper (Station 5)

The machine is provided with double supports in each station of the rotating table to assemble also another handle, a bigger and steel one. The operator just has to set a new receipt (doing regulations if needed), place the handle in the suit support behind the one used to put the tap and the screw, then start the cycle.
The cycle will be almost the same, but in Station 4 the vibrating feeder will be inhibit and the Pick&Place collects the handle directly from the support, then placing it on the tap. 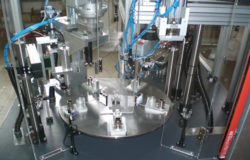 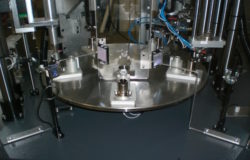 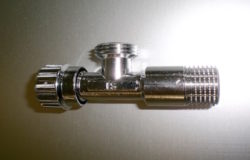